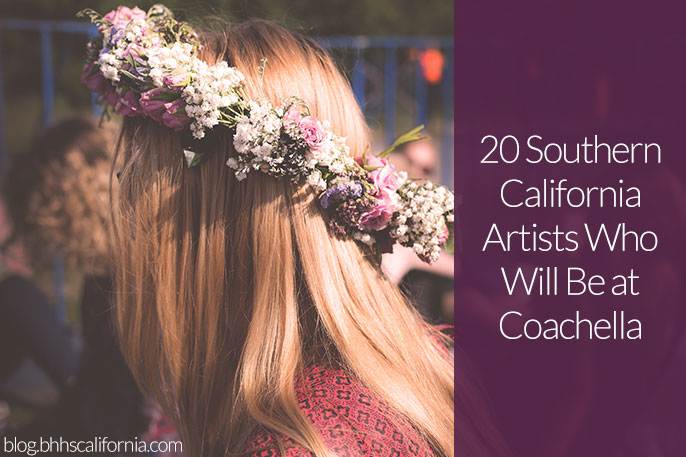 Whether you’re lucky enough to be heading to the desert for three days of musical performances by both top and undiscovered artists or will be eagerly stalking your friends on social media for updates, Coachella is an event that captures the attention of Southern Californians like few other music events do.

The Coachella Valley is in Southern California, so it’s no surprise that many performers are from places you may have been to or recognize.

Here are 20 local artists performing at Coachella this year, plus three local restaurants that will be serving food both weekends:

Born in Orange County, Jillian Rose Banks is 28 years old with a sound that is described as dark R&B.

The Interrupters are a punk/ska band from Los Angeles comprised of vocalist Aimee Interrupter, Kevin Bivona, Justin Bivona, and Jesse Bivona on guitar, bass, and drums.

This indie rock band is based in Silver Lake, Los Angeles but got its start in Orange County. The group consists of Kelcey Ayer, Ryan Hahn, Taylor Rice, Andy Hamm, and Matt Frazier.

Members Michael David and Tyler Blake formed CLASSIXX in 2005. Together, the two are a production and DJ duo based in Los Angeles.

GROUPLOVE is from Los Angeles and is a live act you won’t want to miss. Their contemporary sound is created by Christian Zucconi, Ryan Rabin, Hannah Hooper, and Andrew Wessen.

San Diego-based Kindred will be serving up vegan cuisine at Coachella this year. If you have VIP tickets to Coachella, you can make reservations for the prix-fixe menu served in their desert lair. If you can’t make it out to the desert, head to their South Park restaurant and listen to this Coachella playlist. It will almost feel like you’re there.

If you’re looking for a casual spot for brews and gourmet comfort food, head over to the Craft Beer Barn and look for this L.A.-based eatery.

If you’re looking for “L.A. in a rice bowl,” head over to The Boardwalk | Terrace to Chego.

Will you be at Coachella this year? Who are you most excited to see?