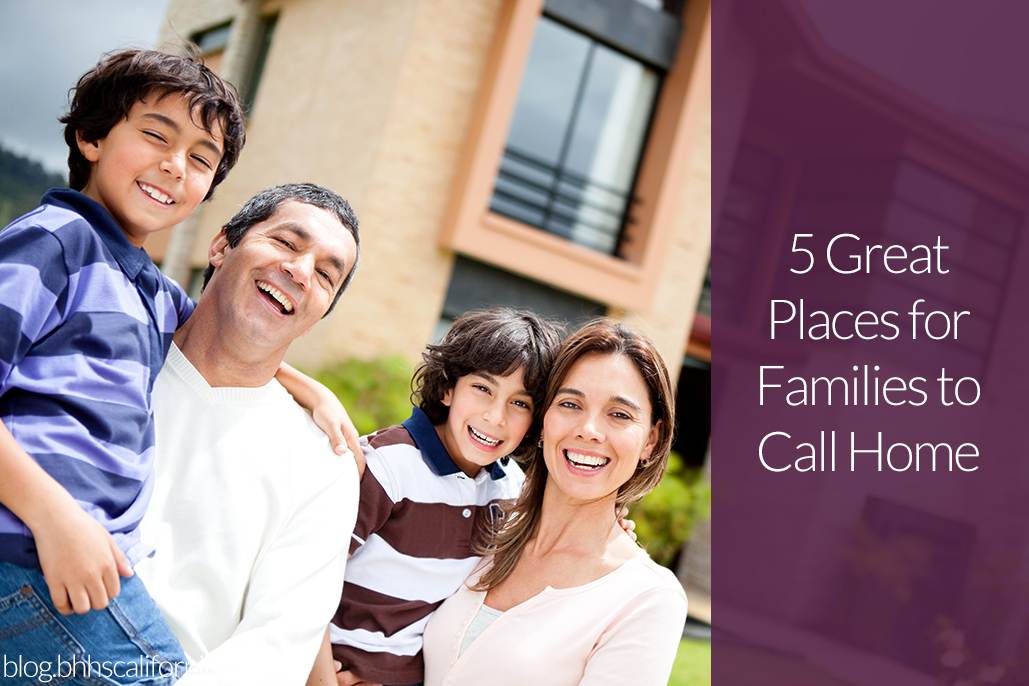 If you have a growing family and are thinking about moving, you have a lot of other things to think about. What about the schools? The neighborhood culture? Proximity to shopping and entertainment?

You probably have a good idea about what to expect in the areas you’re considering. Family and friends can help you decide, but it’s also a good idea to talk to a real estate pro because knowing everything about a community is essential to what they do for a living.

With more than 60 offices in five Southern California counties spanning the Central Coast to San Diego, there are plenty of great places for families to choose from. We are featuring one family-friendly community in each county.

Carlsbad (La Costa Valley) is made for young families. One resident who lives there received 160 trick-or-treaters last Halloween. Homes are decorated for the holidays, and you can drive through the neighborhoods most days and see children playing dodgeball or tossing a ball in front of their homes. Carlsbad Unified School District gets consistently high reviews from parents. It has 10,993 students attending 16 schools in grades K-12. According to state standards, 76 percent of students in the district are considered proficient in math and/or reading. The district has an annual budget of $151,529,000, spending an average of $13,697 per student.

Search for homes in Carlsbad now.

Cypress is a diverse city of 49,000. Cypress High School had commendable three-year median API scores of 900. Cypress’s Oxford Academy, which admits top students from Cypress and several other cities, scored an outstanding 992 and is considered one of the top 10 public high schools in the country. Cypress is just five miles to Knott’s Berry Farm, Knott’s Soak City, and the Cerritos Center for the Performing Arts, and about 20 minutes from Disneyland. Nearby Cerritos has a large skate park, tennis club, and Los Alamitos Race Course.

Check out the Cypress homes that are for sale right now.

Tarzana is a neighborhood of 35,500 in the San Fernando Valley. And yes, it was named after the popular jungle character created by author Edgar Rice Burroughs that was adapted into a Disney animated film in 1999. What makes Tarzana a great neighborhood for young families is its strong economy, educated residents, and low crime rate. It is within the Los Angeles Unified School District, but is also home to Columbia College Hollywood, which teaches a variety of subjects related to film and TV. For young animal lovers, Red Barn Feed & Saddlery features all the tools you’ll need for raising pets, plus some animal adoptions.

Moorpark has a friendly, small-town feel, yet is close enough to Los Angeles to enjoy all the opportunities there for work and play. It is a 30-minute ride to Malibu and the coast. Moorpark has low crime, good schools, a Metrolink commuter rail station, plus numerous parks and hiking trails. The city of about 35,000 is completely surrounded by open space, parklands, and agriculture. Moorpark Unified School District is the largest employer in town. It has 6,812 students attending 12 schools in grades K-12. The district has an annual budget of $67,488,000, spending an average of $9,517 per student.

Make moves to move your family to Moorpark now.

Carpinteria fits the very definition of a of beachy surf town. Oozing with small-town charm, Carpinteria is known for its laid-back vibe and super-relaxed ambiance. The coastal city of 13,000 is just south of Santa Barbara. People move to Carpinteria because they commute to Santa Barbara for the lower cost of living, or they fall in love with the crisp and persistent waves that rock the beaches. Downtown Carpinteria has just a few stoplights and loads of fun restaurants and boutiques. The homes are more affordable than nearby Santa Barbara and Montecito. There is one high school, one middle school, four elementary schools, and a private preparatory school.

See what homes are for sale in Carpinteria today.