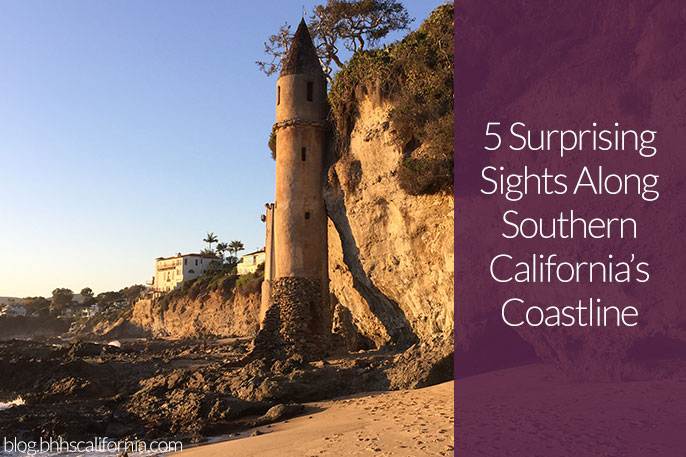 Few things are more relaxing than spreading out a towel on a Southern California beach on a warm summer day, taking an occasional dip in the ocean, and enjoying the cooling breezes.

But once you’ve had enough horizontal time on the sand, why not opt to explore some of the more unusual features that grace our coastline? They aren’t that far away from the mostly flat, wide beaches most visitors tend to inhabit. There’s history, intrigue, and wonder just waiting for you to check out above the tideline.

We found several places that are worth a visit when you get that itch to explore.

The Mysterious Tower of Laguna Beach

This castle-like tower at the base of a cliff at Victoria Beach has withstood salt air and crashing waves for more than 90 years. It’s in pretty delicate condition, so you wouldn’t want to try getting inside. If you did, you would see a wooden spiral stairway. Its owners built the tower in 1926 as a way to get to and from their house at the top of the bluff. The tower is made of poured concrete with an ocean stone foundation, and sports a cone-shaped roof made of shingles. A few narrow window openings in the tower wall allow light to pass through.

In 1923, famed film director and producer Cecil B. DeMille left behind the largest movie set ever built, in the sand dunes on the Santa Barbara County coast near the small town of Guadalupe. The set, named “The City of the Pharoah,” was built for the silent epic “The Ten Commandments.” It consisted of an avenue of 21 sphinxes, four 35-foot-tall Pharaoh statues, an 800-foot-wide temple, and 110-foot-tall gates.

After filming wrapped up, DeMille felt the set was too expensive to move, and he didn’t want rival filmmakers to make off with it. So he ordered it shoved into a trench and buried. And that’s where “The Lost City of DeMille” lay entombed, undisturbed for 60 years. If you want to take a look, docent-led tours through the dunes are available. Information is the Dunes Center website.

This internationally known surf spot in Encinitas is named after a real swami, Paramahansa Yogananda, because above it are the grounds and hermitage of the Self-Realization Fellowship ashram, built in 1937. The three large lotus towers along South Coast Highway are visible from the road and the beach. You can visit the Fellowship’s gift/bookstore and some of its gardens. Visit its website for details.

“The Wedge” at Newport Beach

When south-facing swells hit the rock jetty at the far-east end of the Balboa Peninsula, the result can only be described as awesome. Steep, powerful waves up to 30 feet high burst above the flat shoreline, and crash down to the delight of the assembled crowds, who sometimes get drenched. Some of the most skilled bodysurfers anywhere brave “The Wedge”–the biggest swell in Southern California–and draw an audience of everyone from locals in shorts to businesspeople in suits. “The Wedge” breaks largest when intense Southern Hemisphere storms or large tropical cyclones send their long period energy from the south-southwest, primarily in the summer fall. If the surf isn’t pumping when you visit, you can always get an up-close look at the beautiful oceanfront homes, or sit at the jetty and watch the boats come in and out of the harbor.

Just south of Coronado is a long, wide-open beach offering recreational opportunities galore. You can enjoy swimming, surfing, boating, kayaking, water-skiing, volleyball, camping, and picnicking. Anglers can fish for perch, corbina, grunion, and yellowfin croaker. You can also stay overnight in your RV, close to picnic areas, bathroom and shower facilities, and great shell collecting. The state-operated destination is named for the silvery oyster shells that cover the beach and dunes. You also can find clams buried in the sand by the water. Bring your bicycles because the flat, meandering Bayshore Bikeway takes you past the San Diego National Wildlife Refuge, and offers great views of San Diego Bay and the city skyline.