When Is the Best Time to Buy a House? Depends on Who You Ask Knowing your market’s ups and downs is the key to finding out 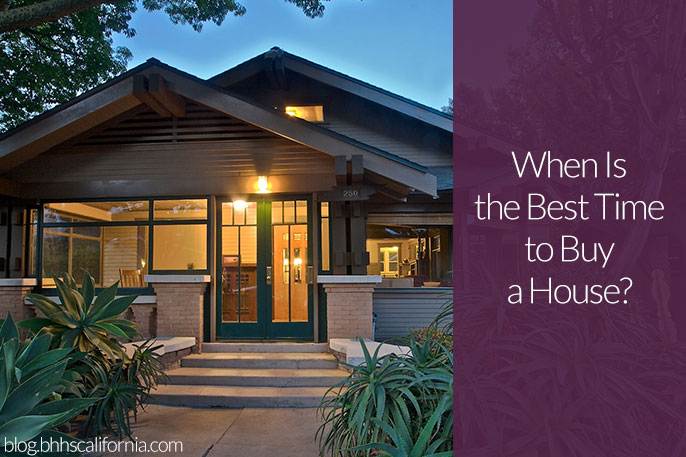 When is the best time to buy a home? Ask a dozen real estate professionals and you’ll get at least 13 different replies.

There’s no precise science to answering the question. Market forces across the country vary by factors such as weather, terrain, interest rates, school districts, and, of course, housing inventory.

We sought out several opinions that might help answer the question–but not once and for all. Consult with a qualified real estate professional any time of the year to get the best advice on when to make that big step in the neighborhood you’re eyeing.

“It’s hard to say because, since about 2000, the market has been so erratic and crazy, and so many things have affected buyers and sellers that it’s really hard to talk in generalities anymore,” said Patty Cohen of our La Jolla office.

“We have a problem nationally–and especially in the city and county of San Diego–and it’s a shortage of inventory. It’s been going on for quite some time, and the expectation is it will continue to affect the market. Because of that, the best time to buy a house is when you need it and when you find the right home.”

See? Try to pin an industry expert down about timing and you’ll get that kind of reply. So we asked Patty to be a little more specific.

“The peak buying season, traditionally, is definitely spring and summer in San Diego, and I imagine across the country,” she said. “That is when sellers are likely to get the most for their home, and most of the buyers are out wanting a home. The reason for that, a lot of the time, is school starting in the fall. So families want to be settled in their home by summer. If you’re a buyer looking for a deal, going for it in winter could lead you to a better deal.”

Sales rise with the temperature

Here’s another take on it: Spring and fall are better times for buyers, according to Zillow. Something for a buyer to consider, the website notes, is that real estate inventory tends to fluctuate by season. Each spring and fall tend to see an increase in home inventory due to the seasons. More inventory means more options for buyers.

And here’s what Lawrence Yun, chief economist for the National Association of REALTORS®, has to say about it:

“Home sales tend to rise along with the temperature. According to realtor.com, 50 percent of homes are sold in summer. But if you want to get the best deal–and avoid a bidding war–your odds are best when the weather turns colder and the days grow short.”

Every year, January closings tend to show a dip in prices, suggesting that buyers who made offers in November and December got the best deals, Yun said. In summer 2014, for example, median home prices climbed past $220,000 but dropped below $200,000 in January 2015. Median home prices nearly hit $240,000 the following summer, only to move down again in the late fall.

“Some of this is driven by the types of houses that sell in the winter months,” he said. “Families with school-age kids often account for larger, pricier homes, and they prefer to buy in the summer when kids are out of school.”

Knowing this, many sellers don’t list their homes later in the year, and many pull their listings in late fall in hopes of starting fresh in the spring. Sellers who stick with it, the theory goes, are the most motivated. A RealtyTrac analysis of home sales over 15 years recently showed October as the best month to buy at a discount, 2.6% less than the fair-market value at that time.

Buyers who shop later in the year may be able to negotiate a better price, Yun noted, but there is a possible tradeoff: less selection. That’s because inventory of homes for sale typically starts to decline in September, with the biggest dip around the holidays. Historically, it drops 10 percent in December, with little improvement in January. “Inventory begins to measurably increase in the spring,” he said. Over a recent four-year period it looked like a 10 percent jump in inventory from March to April.

Two best days of the year?

Over at The Balance money-management site, one veteran real estate agent said that analytically speaking, there are at least two days of the year that give home buyers the edge. Each of those days is a holiday.

The second-best day of the year to make an offer on a home: Easter Sunday. Why? Because on that day, there usually is very little competition. On Monday, offers start rolling in, but they’re probably too late.

The best day of the year: Christmas. Almost nobody looks at homes on Christmas Day. So buying on or near that day can be a smart strategy. If you scout out the homes on which you’d like to make offers a few days before Christmas, you’ll be better positioned. Few buyers are out looking at homes during Christmas week, so the chance of multiple offers or any competition whatsoever is very low. Of course, you’ll need to find a real estate agent who’ll work on Christmas Day, and be aggressive enough to get the seller’s agent to open up the house for you.

There’s nothing like government and industry statistics to provide other ideas on the topic. According to Federal Reserve, Census Bureau, and Zillow data, January has the lowest median sales price at closing, and homes stay on the market the longest, which makes it the best month to buy a home, along with February.

On the flip side, June is the worst month to buy due to its highest median sales price at closing and shortest days on market.

In addition to seeking a home for sale during the chill of winter, it wouldn’t hurt to look for a sale due to a divorce, job loss, or liquidity problem. Real estate agents keep their eyes and ears out for such situations, so don’t be afraid to inquire about it.

It’s vital to know your market’s quirks so you can make an educated decision about when to buy. A professional real estate agent can help you do just that. The best time really depends on what makes the most sense for your situation. No seasonal discount is worth rushing into a decision, paying a higher interest rate, or ending up with the wrong house.