As Los Angeles emerges as a leading cultural hub, the city’s artists, galleries, museums, curators and advisors continue to define a movement that’s attracting—and retaining—the world’s most inspiring visionaries. With fearless talent and a community that offers unabashed support, L.A. is not only a place to be for serious artists and collectors, it is the place to be. 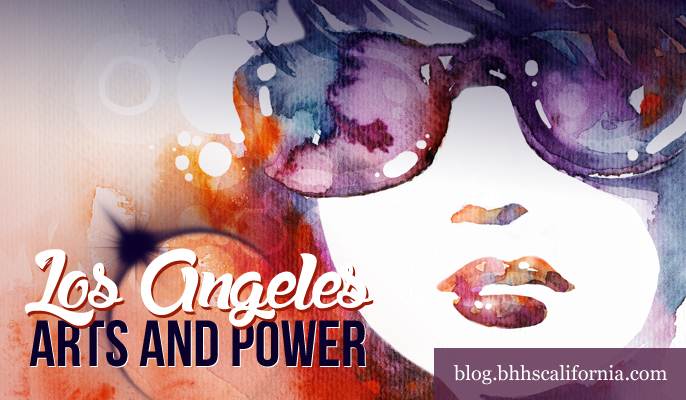 REBEL WITH A CAUSE
Artist Analia Saban defies labels in her quest for self-expression.

“I live out of my carry-on bag,” says Analia Saban. The 34-year-old Buenos Aires-born artist has just rushed into her studio—an airy Santa Monica space she inherited from her mentor, artist John Baldessari—from a German lesson and is packing to leave for New York. Then it’s off to Dusseldorf, where she teaches at the prestigious Kunstakademie, before returning to L.A., a cycle she’s repeated for over a year. She switches genres just as seamlessly. Currently working in marble for a February exhibition at New York’s Tanya Bonakdar Gallery, Saban also has pieces in LACMA’s current show, Variations: Conversations in and Around Abstract Painting. In 2012, she walked off with the Rudin Prize for Emerging Photographers. “If I think I’m getting a bit too comfortable, then I want to push myself,” Saban says. “She’s experimenting with materials in an interesting way, often making them do things that you don’t expect,” says MOCA curator Bennett Simpson. Nancy Meyer, who co-curated the LACMA show, agrees: “Her work challenges the confines of what a painting or a sculpture is meant to be.” The one label Saban does celebrate is being an Angeleno. “I can’t say enough good things about how lucky artists are here. The weather, affordability and resources for fabrication are limitless. And then there are the institutions. I can finish a body of work, call some curators and they just show up.” There’s a word for that: talented.

LAXART BRANCHES OUT
For nearly a decade, the nonprofit group LAXArt has been pushing the boundaries of experimental contemporary art in Los Angeles, and to celebrate its 10th anniversary, founder Lauri Firstenberg is moving ahead at full speed. Her plans include launching a new citywide art initiative and moving east to a much larger space. Firstenberg is joining a number of galleries—like David Kordansky and Regen Projects—that have recently moved to the white-hot Hollywood Arts District. LAXArt’s new Lorcan O’Herlihy-designed space was once the recording studio of Radio Recorders, which worked with Louis Armstrong, Elvis and Billie Holiday. It will also debut The Occasional, a citywide program featuring newly commissioned work by a roster of mainly international artists like Shana Lutker and Mark Boulos. But perhaps the most exciting news is the launch of LAXDesign, a group led by former LACMA Decorative Arts Council chair Oliver Furth, that focuses on L.A.’s rich design and architectural heritage. This new group will concentrate on the conversation surrounding design as it relates to L.A.,” says Furth. “We’ll participate in intimate studio visits with the city’s leading designers and emerging makers, while thoughtfully pushing the design dialogue forward.” 7000 Santa Monica Blvd., L.A., 310.559.0166

Crowned one of L.A.’s most exciting artists, Channing Hansen is having more than a moment. A prominent player at the Hammer Museum’s Made in L.A. exhibit, the native Angeleno is newly represented by Marc Selwyn Fine Art, who will present his work at the Art Los Angeles Contemporary in January. Hansen’s “paintings” give new meaning to the word, as they are actually created with hand-dyed fibers that he meticulously knits and stretches onto wooden frames. Compelling for many reasons, one standout is the algorithm he created to guide his practice. As he works, the computer generates not just color, but the fibers, textures and patterns of each piece. “As [choreographer and musician] Simone Forti so beautifully suggested to me once, the algorithm is my score,” he says. Having grown up in an artistic family—grandfather Al embraced Fluxus’ life-as-art philosophy and his brother is the acclaimed singer, Beck—it’s not surprising that Hansen inherited the creativity gene. He sources his materials thoughtfully, sometimes shearing the sheep himself, dyeing and spinning the yarn, then knitting and stretching pieces in his Silver Lake studio. L.A. has had a major effect on the lifetime local, whose affection for his birthplace has grown over time. “I cannot imagine a better city to be an artist in,” he says. “The creative people you encounter are unbelievably inspiring, and there’s a freedom to experiment that comes from not being in the center.”

FAB 5: ESSENTIAL EXHIBITIONS
With a plethora of enticing events ahead—January’s Art Los Angeles Contemporary and The Broad Downtown’s highly anticipated opening are just two on the horizon—Angelenos have countless options when it comes to art-world happenings. Here, five can’t-miss shows for the upcoming months.

COLLECTOR’S EDITION
From curators and gallery owners to critics and enthusiasts, the expert consensus is that L.A.’s ever evolving art scene is as dynamic and vibrant as ever. Here, some art-world notables share their picks for the local emerging artists you need to know in 2015.

THE ILLUSIONIST
Glenn Kaino’s ever changing body of work pushes viewers to look beyond the surface.

Glenn Kaino is a magician among artists. The innovator (and, yes, professional magician) hovers between unlikely disciplines. An internationally renowned conceptual artist with all the requisite laurels, and, incidentally, a top digital media creative, Kaino’s work references everything from magic and science to politics. Trained as a sculptor, the Los Feliz resident refers to his process as conceptual “kitbashing,” a model-maker’s term for creating something unique from borrowed parts. A perfect example is his recent project, “Tank,” in which he engineered an installation of living coral colonies. Competing coral species were grown in aquariums on epoxy casts of military tank parts and left to vie for survival in real time, an ecological metaphor for political conflict. Kaino opens his second solo show at Honor Fraser gallery in January and has said that the work will explore “old mythologies and technologies that have been burned down, eroded and reconfigured.” So it is no wonder, given his ambitions to forge social contracts between art and audience, that he’s the recipient of a monumental public art commission: the Sixth Street Viaduct Rejuvenation Project linking the Arts District to Boyle Heights. “I’ve spent years on each side of the bridge,” says Kaino, “and to connect the two sides in a meaningful way is a great challenge and responsibility.” Magic in the making.

How would you describe the current state of the art world in L.A.? Extremely robust. There is a density of world-class art schools, a thriving museum network and a huge artist population. There’s also a blossoming gallery situation.

What do you look for when acquiring pieces? We look for work that marries form and content in equal measure. I want art that makes you see the world in a way you didn’t see it before. If I see a piece and love it and understand it right away, it probably isn’t going to go the distance.

What is the most exciting thing you have encountered visually or conceptually in L.A. this year? I’ve only been here for a short while, but I love Kahlil Joseph’s work at the Underground Museum. His videos are part of a group show of African sculpture.

Who are some artists, curators or gallerists you feel are changing L.A.’s art game? Shaun Regen, Hannah Hoffman, The Box downtown, Lisa Overduin’s gallery on Sunset… David Kordansky has an interesting program. What’s important about L.A. is that the art schools are here and what’s great is so many of the most prominent and important artists teach. There’s a real commitment to teaching, which makes L.A. different from other art hubs. In New York, a sign of success for an artist is not teaching; in L.A., a sign of success is teaching.

What exhibits are you most looking forward to in 2015? The Doris Salcedo retrospective at the Guggenheim is something I’m looking forward to. There’s going to be a Matthew Barney show at MOCA that will be amazing, and the Charles Gaines exhibition at the Hammer will be a must-see exhibition!

The Advisor
Veronica Fernandez is an art advisor whose clients include everyone from CEOs to Texas oilmen to Qatari royalty; she helps to build their blue-chip collections.

How would you describe the current state of the art world in Los Angeles? Buoyant, blown up and far out.

What do you look for when acquiring pieces? What about it provokes interest, inquiry, discomfort, desire? Have I seen or experienced anything like this before? Am I being financially conscious in moving forward with this acquisition? Does it increase the caliber of the existing collection? Will it have the power to make someone stop to look at it every day?

What is the most exciting thing you have encountered visually or conceptually in L.A. this year? David Zwirner exhibited Jordan Wolfson’s animatronic sculpture, (“Female figure,” 2014). You had to make an appointment to see the performance and were placed in a mirrored room alone with the sculpture, serving as a voyeur of sorts to her dancing to Paul Simon’s ‘Graceland.’ The experience was fascinating, both believable and unbelievable at the same time. Wolfson couldn’t have made this work without Hollywood. He worked closely with a special effects studio and created a very cutting-edge piece, unlike anything I had ever seen.

Who are some artists, curators or gallerists you feel are changing L.A.’s art game? For gallerists there’s Hannah Hoffman, Francois Ghebaly and Steve Turner. Artists such as Piero Golia and his Chalet Hollywood project. Sterling Ruby continues to be a force to be reckoned with, as does Ed Ruscha.

What exhibits are you most looking forward to in 2015? Kazuo Shiraga and Sadamasa Motonaga at the Dallas Museum of Art and the opening of the Louvre Museum in Abu Dhabi, designed by Jean Nouvel.