Metal-sculpture lovers are heading for the Hills 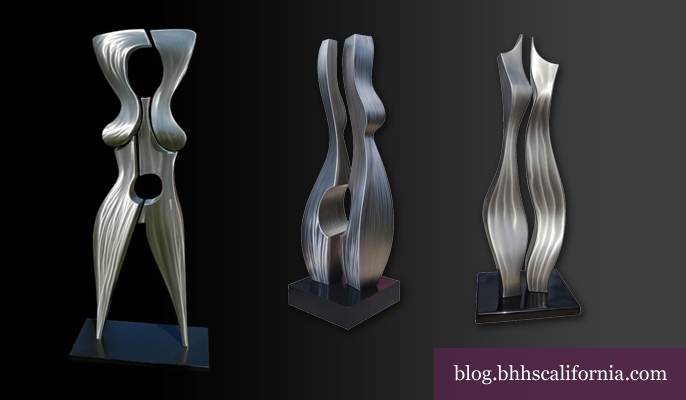 Looking for a piece of art that gets noticed inside or outside your home, office, or even office building? Los Angeles-based metal sculptor James Hill could have what you have in mind.

From graceful and whimsical to bold and enduring, Hill’s installations can be found in private collections and public spaces around California. Actor Ed Harris and Google co-founder Sergey Brin have one. So does Mission Hospital in Mission Viejo, among other medical facilities in the area.

Originally from Claremont, 52-year-old Hill specializes in steel, stainless-steel and bronze commissions he builds solo in his studio at the Brewery Art Complex in downtown L.A., touted as the world’s largest artist-in-residence community with about 320 spaces in 20 buildings.

He was working in other mediums while earning a degree in fine arts at the University of California, Santa Cruz, when “one of my professors suggested that I take a metal class. So I did and then I took it every quarter,” he said. “Once I got the bug, there was no going back.”

Hill usually works without an assistant, except on larger pieces. He designs, builds and signs each sculpture. The tools of his trade are primarily a TIG (tungsten inert gas) welder, electric torch, laser cutter, and handheld angle grinders for finish work.

His sculptures have been described as “a celebration of optimism that unite the elegance of the organic form with the structure of the modern world.” Look closely and you’ll see a curvy female figure under a bouffant hairdo. Or maybe that’s a flame in front of The Ahmanson Library at Campbell Hall School in North Hollywood. Whatever your interpretation, Hill’s work has caught on with collectors.

“I was doing quite a lot of public pieces before the recession,” he says. “But now it’s mostly residential and occasionally institutional. Most of my clients between ages 60 and 65 are telling me they’ve bought a new place and had a traditional collection, but are now very interested in modern and contemporary pieces. So they’re having a lot of fun collecting a new body of work.”

You can view some of Hill’s personal and commissioned pieces on his website, at Michael Levy Gallery in Long Beach, and at Coda Gallery in Palm Desert. He will be exhibiting at the Mission Federal Credit Union ArtWalk in San Diego April 25-26, and at other art fairs.