East meets west in design-rich Istanbul, where history mingles with modernism for the trendiest of Turkish delights. 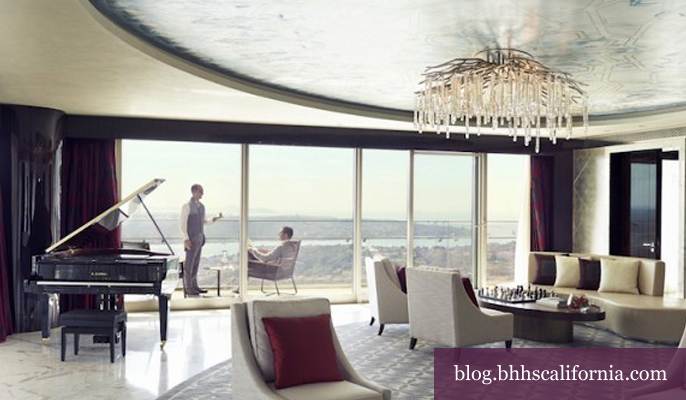 Once a capital of the great Roman Empire and seat of the Ottoman Empire, Istanbul—one of the world’s only cities set on two continents, Asia and Europe—has enchanted visitors for centuries. You can also count present-day intrigue among the ancient city’s many allures, as you explore winding streets snaking past iconic examples of Ottoman architecture mixed with hip neighborhoods like Nişantaşi and Karaköy. By seamlessly blending rich Oriental history with occidental modernity, Istanbul is quite unlike any city in the world­—a luxurious sum of all its glorious parts.

One of the finest examples of this flawless union of past and present is the newly opened Raffles Istanbul. Nestled in the ultramodern Zorlu Center complex—where Turkey’s inaugural Apple Store, luxury labels like Bulgari and Louis Vuitton, and the country’s largest performing arts venue all reside—Raffles offers guests a splendid hospitality experience that combines sultanworthy service, opulent design and an undeniable sense of place. At the entrance, the property’s imposing lobby instantly acquaints guests with the hotel’s theme, The Dream of Istanbul. Commissioned artwork includes a piece depicting Istanbul’s iconic Dolmabahçe Palace by hyperphotorealist Jean-François Rauzier and a larger-than-life bronze sculpture inspired by the Turkish poem “Lavinia.” And throughout the hotel’s 132 guest rooms and 49 suites, custom-woven Turkish carpets and stylized headboards that depict Istanbul icons such as the Blue Mosque and Hagia Sophia bring the dream theme right into your room.

Speaking of accommodations, the choicest of all options are the Horizon Suites, which feature separate living rooms, powder rooms and sprawling master bedrooms and baths with private wraparound terraces that offer stunning views of the Bosphorus Bridge and the Asian shore beyond.

Cuisine is equally, and elegantly, on point. Standouts include Arola, a signature restaurant from the Michelin-starred Spanish celebrity chef Sergi Arola, where dinner is a multihour affair with countless small plates and family-style dishes, each one a display of culinary wonder; and Rocca, which serves Turkish and Mediterranean fare. Bar options are likewise tantalizing: the refined Writers Bar and the buzzing Long Bar; the latter offers a Turkish take on the world-famous Singapore Sling (the signature tropical drink from the Raffles flagship hotel). The Bosphorus Sling, as it’s called, features the unmistakably Turkish flavor of pomegranate with hints of hibiscus grenadine and Luxardo cherry.

The merging of luxury and high design extends to the spa as well, which happens to be one of the largest and most comprehensive in Istanbul. There’s a host of available massages and treatments (all featuring innovative Gazelli and The Organic Pharmacy skincare products), with the most unique therapies proffered in three traditional hammams. Of these, the Anatolian Grace Hammam Journey—a gentle exfoliation, hydration and massage featuring ingredients such as lavender, milk and honey, and, of course, a soothing hot stone slab—nods to Turkish tradition during every one of its 120 indulgent minutes and culminates with a customary Turkish tea ceremony.

Outside the hotel and its sleek environs, the whole entrancing city awaits. Although Istanbul’s historical peninsula is a must-see, it is the city’s more refined spots that appeal to savvy, sophisticated travelers. So after requisite tours of palaces, mosques and bazaars, head across the Galata Bridge to Karaköy, with its trendy bars, artsy boutiques and hilly, meandering streets. The perfect foil to the city’s historic sites is the Istanbul Modern, a museum featuring works from Turkey’s finest artists, from the late Ottoman Empire to the present day. There’s also a great cafe at the gallery overlooking the legendary hilltop minarets and domes for which the city is known. For a special museum experience, don’t miss The Museum of Innocence, developed by Turkish Nobel laureate Orhan Pamuk and named the 2014 European Museum of the Year, which depicts everyday life in Istanbul during the 1960s and ’70s.

Whatever your preferred itinerary, one thing is for sure—you will leave Istanbul awed and enriched by the glamour and allure of East and West, old and new. From $760 per night

Essential Istanbul
DINE
For the best views of the Bosphorus—not to mention some of the best seafood in town—don’t skip the rooftop of Sur Balik in Beikta, just a short ride from Raffles. Zubeyir, in the Beyolu neighborhood, prepares the top kebabs in all of Istanbul—that is, traditionally, on an open wood-fired grill for all to see. Like in any hip city, brunch is a popular weekend affair. Istanbul’s hottest spots for this ever-important meal are Aheste, Ak Kahve and The House Café in Ortaköy.

SIP
Rooftop bars like Mixo Terrace, NuTeras and Vogue are the places to see and be seen. Wine bars featuring local vintages along with cheeses and small bites are omnipresent, with the coolest among them being Kav Butik in Niantai.

SHOP
In the posh Niantai district, local designers such as couturiere Dilek Hanif and emerging stars such as Asli Filinta (whose supertrendy looks feature motifs from Ottoman art) flaunt their uberstylish wares. Local high-end street brands such as Yargici, Ipekyol, Mavi and Nu give their European and American counterparts a run for their money, while Istanbul’s largest Beymen store, one of the most impressive department stores for selection and design, is located right in the Zorlu Center adjacent to Raffles. The property itself hosts an outpost for Sevan Bicakci, the eccentric Turkish jewelry designer whose signature cocktail rings are worn by the likes of designer Tory Burch and Oscar-winner Catherine Zeta-Jones.