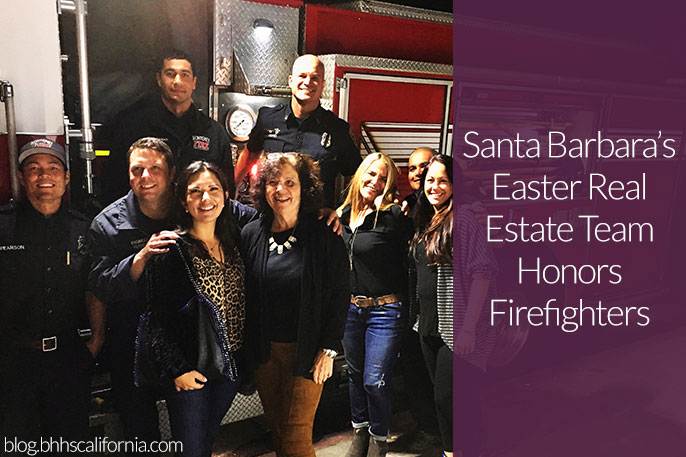 Firefighters and first responders involved in battling the recent devastating wildfires in Santa Barbara and Ventura counties got a well-deserved break–and lots of respect–when they were treated to dinners by the Easter Team in our Santa Barbara office.

Caption for above image: Easter Team members who joined crew of the Monterey Fire Department for a ride on their truck are, front from left, real estate agent Marcy Easter Eliassen, team leader Gloria Easter; back from left, marketing director Leigh Groefsema Beermann, and agent Brooke Ebner, all with the Santa Barbara office of Berkshire Hathaway HomeServices California Properties. Not pictured is agent Jenny Easter.

Away from the fire lines, Easter Team hosted 21 firefighters from the San Ramon Valley Fire Protection District at Harry’s Plaza Café in Santa Barbara on December 17. The dinner was arranged by lending partner Diana MacFarlane, whose son is among the firefighters. Two nights later, the Easter Team treated five members of the Monterey Fire Department to dinner at Joe’s Café, also in Santa Barbara.

“Both evenings were filled with great conversations and great respect,” team leader Gloria Easter said. “We are all so much in awe of how these firefighters and first responders protected Santa Barbara and Ventura counties. They arrived in uniform, and when they walked into Harry’s, everyone in the restaurant gave them a standing ovation. The same thing happened when they left.

“They got a similar reception at Joe’s. People came up and wanted to buy them dessert, and approached them very courteously during dinner to just thank them for their service. It was very heartwarming.” 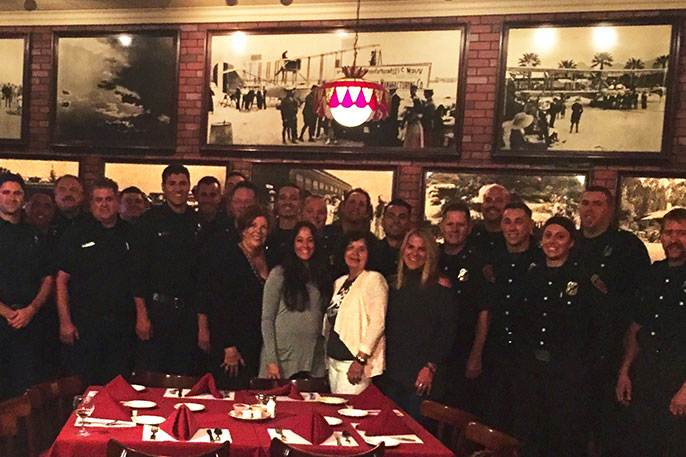 Hitching a ride on a firetruck

After the meal at Joe’s, Gloria said, her team was treated to a three-block ride aboard the Monterey firetruck.

“They finished off lots of appetizers and a huge buffet at Harry’s,” Gloria noted. “They said they were getting tired of peanut butter and jelly sandwiches out on the fire lines. But every single one of them said they loved what they do. It was our honor to give these true heroes a break from what was 14 straight days of fighting one of the most destructive wildfires in California history. We can’t repay them enough for their bravery.”