Why Are So Many New Yorkers Moving to L.A.? The booming economy is just one factor luring them away 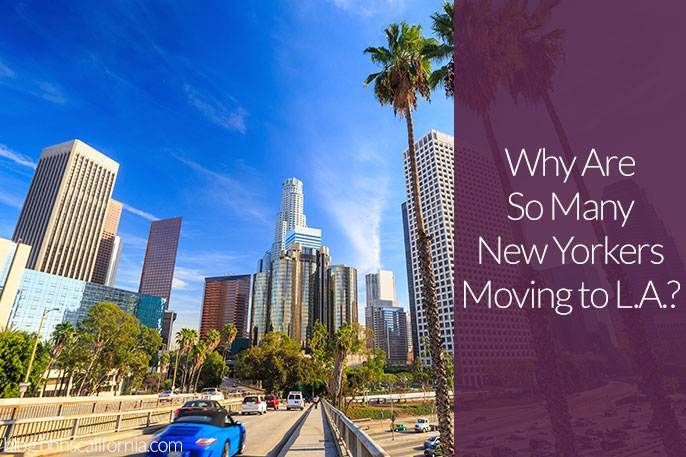 “I’ve now got this nice apartment in New York, one of those L-shaped ones…unfortunately, it’s a lowercase L.” – Rita Rudner

The rivalry between Los Angeles and New York has been going on for decades. Which city has the best weather, restaurants, entertainment, shopping, social scene, housing costs? No one will ever agree, but for now, at least when it comes to who’s moving where, L.A. seems to be in the lead.

According to LinkedIn’s Workforce Report for August, more New Yorkers have moved to L.A. in the past year than the other way around. For every 10,000 Angelenos on LinkedIn, 7.3 are relatively new from New York, according to the report, making L.A. the top out-of-state destination for New York City transplants. On the opposite side, the report found that for every 10,000 users in NYC, 4.1 recently moved from L.A.

“A few years ago, the New York economy was doing better, but that’s not the case anymore,” LinkedIn’s chief economist Guy Berger said. “L.A.’s economy is doing well and it has probably become more attractive.”

The business sector in California appears to be exploding, with some economists expecting the state to surpass the United Kingdom as the world’s fifth-largest economy this year. Berger said people in higher-paying industries like movies and TV might be able to weather L.A.’s crazy rents and cost of living, particularly if they come from a city like New York with the same issues.

What makes living in the City of Angels so appealing that someone would want to leave the Big Apple and move west? Zillow recently surveyed some locals from each city to find out why they love their new hometowns. Here’s a sampling of the questions and replies:

Describe the cost of living in your city. Do you find it comparable to the surrounding states?

Describe the pace of life in three words.

What is your city’s source of pride? How does it trump the opposite coast?

Southern California is bigger and more spread out

Being used to a tightly packed city with plenty to do and see just a subway ride away, NYC transplants might not realize how spread out the sights and attractions are in Southern California. After they get used to our car culture, they can take a ride to some they’ve heard of, and some they haven’t:

Whether Los Angeles, San Diego, Orange County, Ventura or Santa Barbara is calling your name, we have great real estate professionals ready to help you achieve your goals.

“Los Angeles is 72 suburbs in search of a city.” – Dorothy Parker