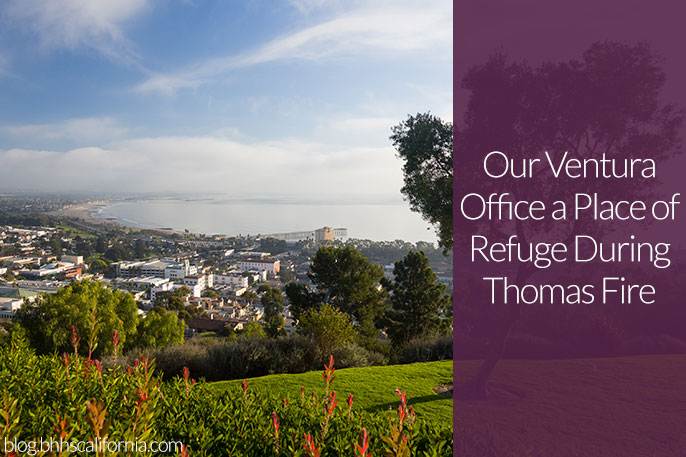 It affected every agent, every staff member, every transaction. Yet our Ventura office never closed as the Thomas fire that began Monday, December 4, engulfed much of the coastal city. It has been classified as the largest wildfire in recorded California history. Despite everything, the office managed to thrive as a community resource, keeping those affected apprised and safe in their time of need.

“The estimate is that about 600 homes were burned to the ground in the city,” Branch Manager Lyle Elliott said. “Two of our agents lost their homes, another’s home was badly damaged and can’t be lived in, one lost their rental property, and one’s father lost his home.

“You’re so thunderstruck when it happens that you’re not sure what to do for a while. Some of our agents and some contractors we use took refuge in the office on Monday night because their homes were evacuated. At different times, almost half of the city was evacuated, either for smoke or fire.

“The air quality for about 10 days was pretty abominable, but our office never closed. We held a meeting of all agents, and people who had lost their homes or were in escrow, with the city’s director of development to talk about the rebuilding process, including what the cleanup activity and requirements would be.”

The office also was educated about a help center that had been set up in a community building called Poinsettia Pavilion. Many vendors were there to answer questions for those affected, such as the Red Cross, the DMV, city permit staff, and Southern California Edison. The city also has opened a special department at City Hall just for those who are rebuilding.

A halt to transactions

During the worst of the fire, transactions for homes in escrow could not be closed until any damages or losses were assessed. Loans could not be funded because the state had declared the city a disaster area. Homeowner’s insurance could not be purchased because no carrier would write it until adjusters could sort through how each home was affected.

“We actually had one house that people moved out of on Monday night at about 6 p.m., but the fire started at about 10 p.m. and destroyed the house, which was supposed to close the next day. Thankfully, sellers already had all their belongings out,” Lyle said.

Despite their personal situations, many Ventura agents are volunteering to work with organizations helping fire victims. Lyle recommends that people from outside the area who want to assist will do the most good by donating to local Red Cross relief efforts. In addition, many Facebook pages, other social media platforms, and websites have been established to address fire issues.

A long process ahead

What happens next in the fire-ravaged areas? Lyle said the state is tasked with removing all contaminants from each scorched lot and each home’s foundation, if it’s still there. That phase is scheduled to be completed by the end of April. The next phase will be removing debris. Once insurance carriers complete their claim reviews and begin issuing payouts, full-scale rebuilding can begin.

There is no estimate on how long it will take for emotional scars to heal. But despite everything, the community has pulled together, Lyle said.

“I don’t think there’s anyone in the office who doesn’t know someone who wasn’t affected,” he said. “One of our agents knows nine clients who lost their homes. Another was evacuated for well over a week because the gas line was broken near their home, even though their house didn’t burn.”

The impact of wildfires

Michael Tachovsky, an agent in our Laguna Beach office and an expert in property-damage economics, shares his predictions for the future of California real estate in a recent report. He notes that an individual’s property could be burned completely, partially, or not at all, but the community will be impacted at the individual level and as a whole.

Many decisions have to be made after a fire. Michael has seen homeowners whose properties survived unscathed pack up and leave, while those who lost everything stay to rebuild.

Wildfires, according to his report, have the ability to change the makeup of a community and alter marketplaces. Well-developed communities such as Ventura and Santa Barbara tend to rebuild, introducing opportunities that may not have existed before. In Ventura and Santa Barbara, strong community response and support are evident, which will need to continue as residents work to rebuild and, when possible, improve on what they once had.

You can read his full take on the impact of California wildfires here.

“I think there’s a sense of sadness because we lost some of the state’s most beautiful natural resources between the mountains and the ocean. But, the community has reacted very strongly. On Saturday, the state came in and held a meeting at the high school. The head of the department said he had done this for well over 30 years, and it was one of the largest turnouts he had ever seen. So there’s been a huge community response in volunteers for the Red Cross, and donations of money and clothes, and people opening their homes. It’s been a very positive response from the community because it affected so much of the community.”

If there’s one thing everyone learned, he added, it is to listen to the instructions of first responders when an emergency strikes:

“The city manager said we were very fortunate that people paid attention to evacuation orders. Considering how quickly the fire moved and it came at night, there could have been a devastating loss of life. But people really paid attention to the evacuations, and that made a huge difference.”