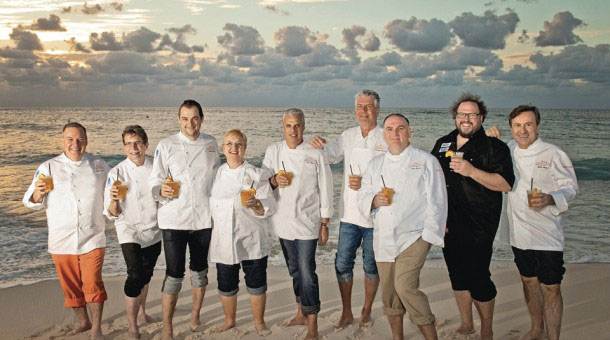 Paradise can be described as a state of delight—and for anyone who appreciates good food, fine wine and breathtaking oceanfront resorts, it can also be defined as Cayman Cookout.

I embarked on my maiden journey to the Caribbean’s premier culinary event this past January, and it’s safe to say it won’t be my last. Set to enter its eighth year, the annual epicurean celebration is co-hosted by The Ritz-Carlton, Grand Cayman and French chef Eric Ripert, whose flagship New York City restaurant, Le Bernardin, holds three Michelin stars. Each incarnation of the event brings world-famous chefs and wine and spirits experts together to contribute to island- and trends-inspired discussions, demonstrations and tastings. Last year’s extravaganza featured such luminaries as Anthony Bourdain, José Andrés and Rick Bayless, along with Daniel Boulud, Daniel Humm, Martin Picard and award-winning chefs from The Ritz-Carlton properties worldwide. All provided a source of constant (not to mention mouthwatering) entertainment in one of the most beautiful settings in the Caribbean.

Spanning almost 76 miles in the western Caribbean Sea, Grand Cayman is the largest of the three Cayman Islands. Edging Cayman Trough, the sea’s deepest point, the reef-surrounded island boasts more than 250 dive sites, including shallow reefs, majestic walls and shipwrecks. Aquanauts of all levels flock to the island year-round, if not to dive then to enjoy one of its most famous sites: Stingray City, where visitors can swim alongside the gentle giants and even stroke their silky skin.

Another such hot spot is the island’s Seven Mile Beach, a long, white-sand shoreline that’s billed as one of the Caribbean’s most beautiful. The perfect place for an early-morning or late-night stroll, this pathway to paradise seems to stretch on endlessly without interruption. It’s also home to The Ritz-Carlton, Grand Cayman, the nerve center of Cayman Cookout. To that end, anyone hoping to book a room for the festivities should get to it; the resort fills quickly, and while there are other gorgeous properties on the island, The Ritz-Carlton is at the hub of the action. In fact, it’s not uncommon for attending chefs to gather in the hotel’s lobby bar each evening after the day’s events.

The island boasts more than 250 dive sites, including reefs and shipwrecks, making it the ideal spot for adventurous divers.

Although star-studded, Cayman Cookout is true to its name: Many aspects of the event feel more like a backyard barbecue and various meals among foodie friends. The opportunity for one-on-one time with top toques abounds—quite literally, either in a cooking class or during one of the event’s special lunches or dinners held at participating restaurants islandwide. These unique culinary offerings showcase the best of Cayman cooking, with chefs taking great pride in their commitment to sourcing island-flavored ingredients from local farmers and the surrounding sea. So impressive is Grand Cayman gastronomy, in fact, that its scene spans from French to Asian cuisine and attracts an international representation of fine chefs and prized restaurants.

The weekend’s itinerary is also distinctive in its ability to surprise, if not astound. In my case, at a day-one demo aptly called Ole José!, chef Andrés, along with escorts Ripert and Bourdain (who, the next day, amused the crowd during an afternoon beachside chat), proves he’s all about presentation, making a grand entrance on horseback before cooking up his famous paella. Although a most auspicious beginning to Cookout, the next three days do not disappoint. At an event titled Mr. Chocolate meets Mr. Garden-to-Table at nearby The Brasserie, Master Pastry Chef Jacques Torres and The Brasserie’s consulting chef, Dean Max, come together to present a delectable lunch that showcases sustainable eating. At Burgers in Paradise with Eric Ripert, shore-set offerings include numerous iterations of mini burgers and tasty bite-size desserts, which would have been followed by a snorkeling expedition had it not been raining. There’s also Modern Mixology at Home with Tony Abou-Ganim, Lidia’s Italy: From Cutting Board to Kitchen Table with Lidia Bastianich, and a fantastic beachfront barbecue featuring delights from all the chefs. Naturally, the Bon Vivant Champagne Brunch Cook-Off draws a killer crowd who come to enjoy everything from sushi and cooked seafood to scrumptious desserts like macarons. And at Michael’s Genuine Food & Drink, the Cayman-based outpost of Michael Schwartz’s buzzy Miami eatery of the same name, dinner is served Cayman-style, with creative preparations of local lionfish. The only thing better than the seafood is the address, as the resto occupies a spot in Camana Bay, a master-planned community that rolls out the white tablecloth for other signature hot spots—namely Ortanique, Abacus, Mizu and its sister restaurant, The Waterfront.

Not only is Camana Bay a haven for restaurant-hoppers, but also savvy shoppers and those in the market for a second residence. Described as one of the first examples of new urbanism in the Caribbean, this pedestrian-driven oasis features a series of pathways that serves as arteries to encourage walking and bike riding and to connect its offerings. The community is anchored by local stores and internationally known brands alike, with suppliers proffering a parade of products, from bed linens to culinary accessories. At West Indies Wine Company, indulge in its selection of 80 different wines by the glass via state-of-the-art Wine Station machines that distribute the wine in varying sizes, from just a taste to a full glass.

With no sales tax adding into the equation, also worth a visit is George Town, the capital city of Grand Cayman, offering fine cuisine and shopping. Whether it’s fine diamonds or a new Rolex, the duty-free retail here is worth the splurge.

Thanks to recent renovations to its accommodations and restaurants, guests are enveloped in luxury at The Ritz-Carlton. Complete with a color scheme to match its seaside surrounds, the hotel weaves indigenous style throughout, from furnishings to decor. Featuring 365 guest rooms and suites; and, 24 one-, two- and three-bedroom residential suites, lodging captures the authentic, laid-back atmosphere of the Caribbean. Designed with relaxation in mind, spacious guest rooms reveal private balconies, quality fittings and lush fabrics. Amenity-stocked bathrooms, meanwhile, are signature The Ritz-Carlton through and through, boasting both black-and-white marbling and welcome separation between bathtub and shower. Stay on the Club Level, and receive five food preparations per day, plus beverages.

Outside these quarters are the resort’s five restaurants, most notably Blue by Eric Ripert, and the 20,000-square-foot, Swiss-inspired Silver Rain spa, a harbor of well-being from minute one. Give initial credit to the cascading wall of water that greets spa-goers upon entry—the first of many restorative enticements at this pampering palace from La Prairie. While all spa therapies are luxuriously wonderful, the Caviar Massage and Caviar Firming Facial are as decadent as the weekend’s food. Both leave the skin feeling soft and radiant, and the body Zen-like in its response—especially when you throw in the post-treatment Champagne and stark-white, yet completely serene, relaxation room.

Prefer to unwind over a round of golf? Head to the resort’s Blue Tip course, where eight of its Greg Norman-designed holes are on water (it’s the Caribbean, after all!). There’s tennis too—played on either red-clay courts or one of the Caribbean’s only professional-quality grass courts—and guests can even indulge in a lesson with a Nick Bollettieri-trained pro.

Over this weekend of excess, there’s no shortage of activities. From the food (oh, the food!) and star sightings to the breathtaking landscapes and truly elegant accommodations, it’s safe to say that, yes, I found paradise at Cayman Cookout. And if that doesn’t whet your appetite to book a ticket for next year’s event, I don’t know what will. Cayman Cookout 2015 featuring chefs Eric Ripert, José Andrés, Anthony Bourdain, Daniel Boulud, Michael White, Marcus Samuelsson, Sean Brock, Lynn Crawford, Sven Elverfeld and Norman Love; with wine expert Ray Isle; and mixologist Charles Joly. Jan. 15-18. Tickets on sale Oct. 15, $45 and up, ticket packages starting at $889. Room rates start at $729 per night at The Ritz-Carlton, Grand Cayman.