How’s Your Flag Etiquette on Memorial Day? Follow the rules of the Flag Code to show the proper respect 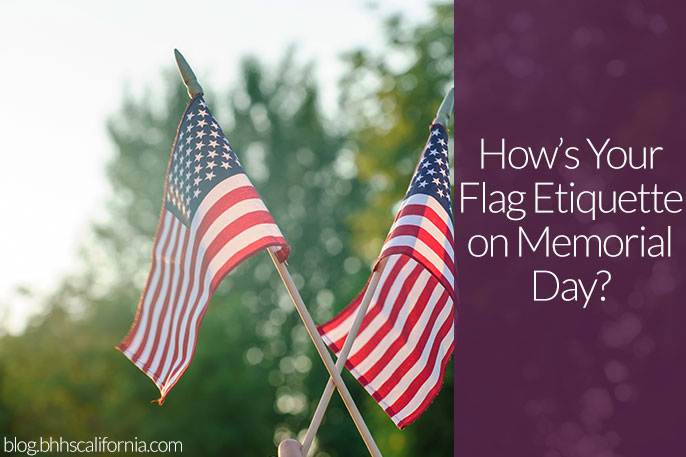 With Memorial Day right around the corner, and Flag Day and Independence Day not far off, it’s the perfect time to refresh our flag etiquette. Each of these federal holidays offers homeowners ample opportunities to display our nation’s flag.

However you elect to honor the men and women who died while serving in the U.S. military on Memorial Day, the adoption of the U.S. flag on June 14, 1777, by resolution of the Second Continental Congress, or the adoption of the Declaration of Independence in 1776, it can be meaningful to observe the proper etiquette when handling our country’s flag.

Here are some tips for showing proper respect for the flag that means so much to so many:

When to fly the flag

The flag can be flown every day, but the government has designated certain days when flying it is especially important. It is recommended that the flag fly from sunrise to sunset on the three upcoming holidays, among others.

Half-staff only until noon Memorial Day

You might not have been aware of this, but the flag should be flown at half-staff only until noon on Memorial Day. That is per the Flag Code, which spells out government regulations regarding flags. The proper way to hoist a flag to half-staff is to draw it all the way to the top of the pole, and then lower it right away to half-staff.

Correct etiquette also requires you to ensure the flag you are flying is in pristine condition. There should be no holes or tears, it shouldn’t be tattered, and the colors should be vibrant, not faded. If the flag you plan to fly isn’t in good condition, properly dispose of it–preferably by burning–and obtain a new one to properly display.

Any time of the year, follow these guidelines to show proper respect for the U.S. flag: