Laguna Niguel: Where You Can Find Your Perfect Home, Wave, View, and Lifestyle The coastal city is clearly the favorite of its happy residents 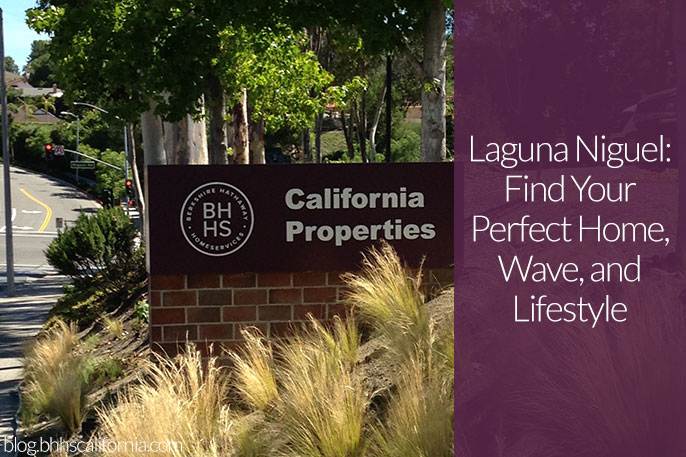 One of the first master-planned communities in California, Laguna Niguel’s proximity to the Orange County coast offers an ideal climate that allows year-round outdoor enjoyment of its many beautiful parks and nearby attractions.

“From a location standpoint, Laguna Niguel is incredible,” said Mike Bianchi, manager of our Laguna Niguel branch office. “It’s halfway between Los Angeles and San Diego off Interstate 5, and the last stop on the 73 Toll Road, just 12 minutes from John Wayne Airport. You can go snowboarding in the mountains in the morning and come back and go surfing in the evening, then go watch a concert at night.”

Where locals “find their perfect”

“This place is awesome,” agent and lifetime resident Matt Clements chimed in. “I’m one of the few who was actually born and raised in Laguna Niguel. “There wasn’t much here when I was born in 1976. It was basically empty rolling hills as far as you could see. We have a really fabulous stretch of beach, Salt Creek and Monarch Bay, and they are our prized little areas. You could say it’s where we locals ‘find our perfect,’ whether it’s a wave or way of life.”

The beach and coast are daily topics of conversation among Matt, his surfing buddies, and many residents of this city of 63,228, according to a 2011 population count. “A lot of really good pro surfers came out of that beach,” he said. “High school kids have the option of joining the surf team for their P.E. class if they’re good enough. A lot of the schools give a varsity letter for surfing. Seven local high schools share the beach between 6 and 8 a.m., so on any given morning you’ll see them out there. That’s how good it is. There used to be pro tournaments there, but now it’s a stop on a lot of amateur events.”

A hotel with a great date spot

One hundred and fifty feet directly above Salt Creek Beach is one of the region’s landmark attractions, The Ritz-Carlton Laguna Niguel, where Matt once worked and found his perfect date spot. Now called 180blũ, it’s an oceanfront dining lounge featuring panoramic views of the Pacific and the blue skies across the horizon.

“It has billion-dollar views, and it’s probably the sexiest bar you’ve ever been to,” he said. “And if you’re a guest, they’ll chauffeur you down in a golf cart and set up beach chairs, umbrellas, and towels for you. It’s pretty much as posh as you can get.

“Non-guests can walk down there as well on the trail. There’s a county park, a basketball court, barbecue, big grass area, and some of the biggest homes you’ve ever seen.”

Single-family is the main style

Most residences are single-family, one-level in the classic ranch style on large lots, and newer semi-custom and custom homes with up to 6,000 square feet of living space can be found as well. According to Mike and Matt, the first phase of development was 1,000 homes among eight major communities in the 1970s. A second development boom occurred in the late ’80s, and the last development was built out just last year. Another prospective area remains but is not likely to be approved due to soil conditions.

Among the bonuses of living in Laguna Niguel, which became an incorporated city in 1989, is the lack of homeowners’ association dues, no Mello-Roos taxes, and no California Coastal Commission jurisdiction.

Because the city is debt-free, it is dedicated to ongoing civic improvements, Mike said. It recently upgraded its administration facility for $27 million in cash, spent $13 million in cash for two major renovations to Crown Valley Park, and is about to go through a third set of upgrades, also in cash. The park has a YMCA, an amphitheater, Olympic-size pool, a Splash Pad for kids, and one of many soccer fields in town.

There’s very little commercial and retail development, although plentiful shopping and dining opportunities are minutes away in nearby communities such as Dana Point, Laguna Beach, San Juan Capistrano, and Costa Mesa. The city is partnering with Orange County to build a seven-acre downtown district with shopping and up to 14 restaurants, due to break ground next year and be completed by 2121.

“It’s a family-friendly city because people really don’t move from here,” Matt said. “Once they get here, it’s their final destination, so there a lot of older people here, including my dad. It’s very laid back, with a beach-town lifestyle. We have an annual Christmas parade, and concerts in the park in summer.”

To find breathtaking views in Laguna Niguel, you don’t have to visit or stay at the Ritz-Carlton. “We have 82 miles of hiking and scenic trails, most with ocean views,” Matt said.

“Mountain biking and leisure bicycling are really popular here. From the Aliso Summit Trail at Laguna Sur, on a clear day you can see pretty darn far–to Catalina, Newport Beach, and Long Beach . If you like horseback riding, there are equestrian trails on the fringe at Nellie Gale Ranch in Laguna Hills. I was the last child born on the ranch, in 1976.”

An office culture of fun and collaboration

What’s it like to work in the Laguna Niguel office of Berkshire Hathaway HomeServices California Properties?

“Our team is a great mix of some incredibly experienced agents who have significant pipelines into the community, plus newer professional agents who are looking for the place that is going to give them the support they need to get into the real estate business,” Mike said. “All of our agents really work well together. It’s a culture of collaboration.”

“It’s a good vibe,” Matt said. “It doesn’t really feel like a real estate office, more like a place to go and get stuff done, and everyone’s friends in there. We basically just do everything with each other for fun, not because we’re worried about competition but because it makes the results better for our clients. We end up wanting to work with each other even more.

“We do have some serious players in our office, and they share their knowledge the most. They really embrace the new agents. They’ll give tips and advice because it’s the right thing to do.

“It’s sort of a millennial/Gen-X vibe with an experienced-agent mix. We pound out some serious transactions. We have fun. A lot of us surf, too.”

That collaboration has had its rewards. In 2016, Mike said, his offices completed 707 transactions, resulting in approximately $500 million in sales volume.

Are you ready to find your perfect in Laguna Niguel? Your search begins now.