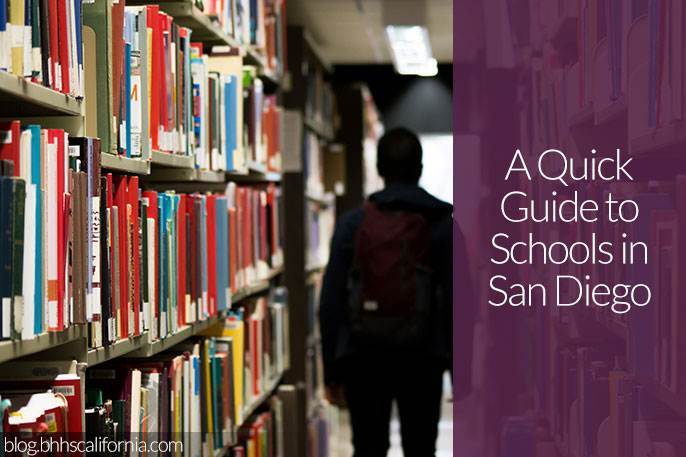 Choosing a school to send your child to can be a stressful decision as a parent. The education your child receives during their formative years will make a tremendous impact on their trajectory in life and getting a top-rated education can help set them up for a path to success later in life.

But how do you find the right school for your child to attend? If you live in San Diego, there is a number of different public and private schools to choose from. When analyzing each school, there are five primary elements you will want to pay close attention to.

Understanding the School Ratings and Rankings

Before delving into some of the public and private schools in San Diego, it is important to understand how the various rating and ranking systems work. In this article, we will talk through three primary rating and ranking systems: the GreatSchools and U.S. News & World Report rating system for assessing public schools and the Niche rating system for assessing private schools.

The GreatSchools rating is developed to provide a high-level overview of how well a school prepares its students for success after graduation. This assessment is called the GreatSchools Summary Rating.

The GreatSchools Summary Rating is prepared by doing a calculation of five of the school’s ratings. These five ratings are the Advanced Courses Rating, Equity Rating, College Readiness Rating, Student or Academic Progress Rating, and the Test Score Rating.

The GreatSchools Summary Rating can vary based on disparities at a school, the availability of the data, and how relevant it is to school level (some areas may not apply to elementary school, for example). If there is not sufficient data to produce a reliable rating, GreatSchools will not calculate a Summary Rating.

The U.S. News ratings work in a four-stepped evaluation approach. First, the school is analyzed to evaluate whether or not the students at the school performed better than they were expected to within their state.

The fourth and final evaluation step was only evaluated on schools passing the first three steps and was judged nationally. The fourth evaluation step analyzed college-readiness performance by looking at Advanced Placement test data. Schools with the highest values based on the total assessment were ranked from one to five hundred and were gold medal winners.

U.S. News evaluates more than twenty-eight thousand public high schools in all fifty states to compile their ratings. The schools are assessed and awarded gold, silver, or bronze medals based on their rating.

Niche ratings are crafted with an intent to balance practical relevance with statistical rigor. Niche ratings utilize data from the United States Department of Education to assess academic and student life data, in addition to ratings collected from Niche users, college data, and test scores.

Once the data has all been compiled, it is then weighed by each individual factor to make sure that no one factor will unnecessarily skew the results of the ranking. Once the weights were assigned, the overall score for the school was calculated and numerical ranking and assigned grades were assigned.

It is important to note that if during the assessment of the data, it was determined that there was not enough data, a school may have been disqualified from the numerical ranking or grading process so as to avoid an inaccurate evaluation. With this understanding of the various ranking and rating systems in mind, it is now possible to examine the public and private schools in San Diego.

San Diego has a number of wonderful school districts that offer residents a high-quality education for their children. Below are the top 5 best school districts in San Diego for 2019 (According to Niche.com) accompanied by their top ranking schools based on their GreatSchool ratings.

San Dieguito Union High School District ranked as the number one best school district in the San Diego area with a total of 11 schools falling within its district and just under 13,000 students.

Poway Unified School District is the number two ranked best school district in the San Diego area with 38 schools and roughly 35,000 students within the district.

Coronado Unified School District is ranked as the number three best school district in San Diego with six schools in its district and roughly 3,000 students.

Carlsbad Unified School District was ranked as the number four best school district in San Diego with nine schools total in the district with over 11 thousand students.

Spencer Valley Elementary School District in Santa Ysabel was ranked as the number five best school district in San Diego with three schools in its district and roughly 3,000 students.

Below are a handful of the top private k-12 and high schools in San Diego as ranked by Niche and a brief overview of each respective school.

Bishops School is ranked as the number one private high school by Niche. Bishops School is known for having devoted teachers and curious, driven students that foster a dedicated learning environment.

Ready to enroll your children in one of these elite San Diego schools?

Find out which San Diego neighborhoods are the most popular and then begin the search for your perfect home.