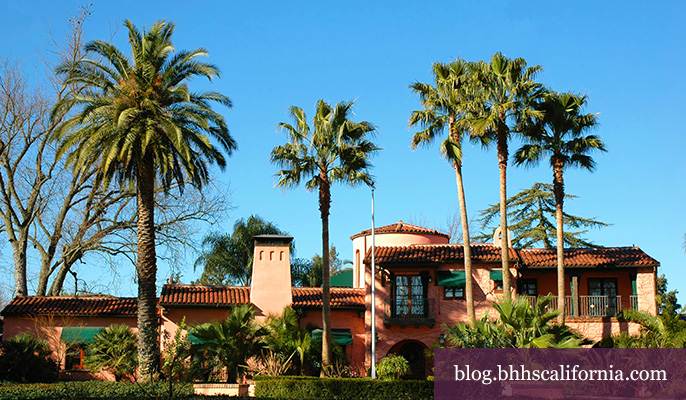 Hollywood, Beverly Hills, and Malibu usually get top billing as “home of the stars.” Traditionally, that’s because movie and TV celebrities like to live near the big studios in the Los Angeles area.

But Santa Barbara County has its fair share of celeb homes and movie locations as well. In fact, California’s original filmmaking capital was the city of Santa Barbara. Flying A, the first major studio of the silent-movie era, was founded there in 1910. Thirteen years later, giant sets for the silent classic The Ten Commandments were built and then abandoned in the sand dunes of Guadalupe, signifying the county’s debut as a cinematic player. Scenes in almost 500 popular titles have been filmed in the region since 1910, according to Internet Movie Database.

Some locations rate bit parts in major films (a supposed Santa Barbara gas station in The Graduate, 1967), while others figure prominently throughout entire flicks (many Santa Barbara settings in It’s Complicated, 2009).

Perhaps most familiar to filmgoers in recent years is Sideways (2004), a Santa Barbara wine-country road trip that, interestingly, features no scenes within the city. The movie proved to be a boon for wineries and other businesses used as locations. If you want to trace the route, visit Sideways The Map.

As for celebrities, the reigning queen is Oprah Winfrey, whose 23,000-square-foot Montecito mansion sits on 42 acres overlooking the Pacific. It’s easy to find via Google Maps at 1633 E. Valley Road. But don’t expect to see much more than locked gates surrounded by tall shrubs. According to local blogs and visitor sites, she doesn’t venture into the community very often.

A similar sight awaits at Neverland Ranch, Michael Jackson’s former fantasyland on 2,500 acres near Los Olivos. It also isn’t difficult to find, but don’t expect to see what’s left of the fabled home, amusement park, and zoo. They’re long gone. The scenery along the way is quite lovely, though.

Celebs like their privacy, which is why they like Santa Barbara County. They can fade into the background much easier there than in L.A., where the paparazzi are a constant nuisance. So it seems to be easier to list the names of some stars who previously lived in the area: Ellen DeGeneres, Drew Barrymore, and Dennis Miller all sold their multimillion-dollar residences over the past few years–presumably to cash in on the county’s booming real estate market. Addresses of the homes they left behind are easily searchable online, should you care to drive by.

Ronald and Nancy Reagan were perhaps the best-known longtime residents. They bought the 688-acre Rancho del Cielo in 1974 as a vacation home near the end of his second term as California governor. The Reagans enjoyed the isolation of living in a 1,500-square-foot home on an unpaved road deep in the Santa Ynez Mountains. After President Reagan’s death in 2004, Mrs. Reagan sold the property to Young America’s Foundation, a conservative group that offers students and supporters the opportunity to visit the ranch.

Curiosity about celebrity homes in Southern California has been around since the film industry began. As this photo from the UCLA Library shows, vendors used to sell maps to the stars’ homes on the Sunset Strip and other streets near L.A.’s posh neighborhoods. Today you can find those addresses for free online, along with aerial and street views. You can still take guided tours past those homes, too. Better leave the drone at home, though.